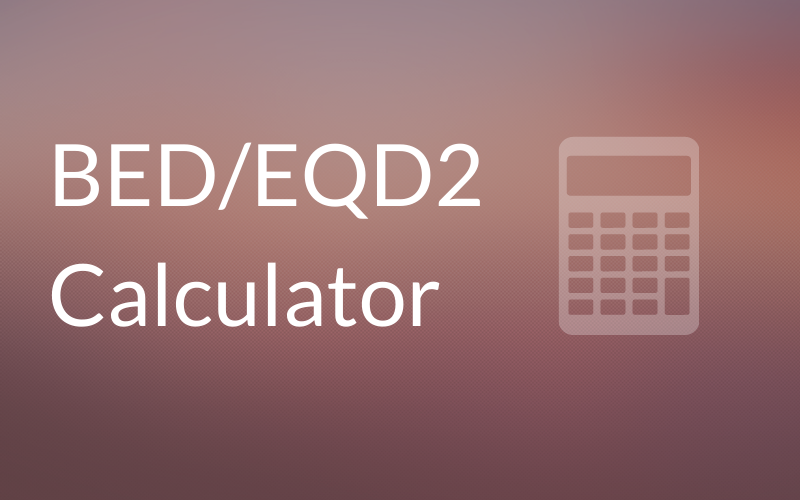 The equation determines the biological effect (E) as a function of dose (D), the linear dose damage response (α), and the quadratic dose response in tissue (β).

In general, cell injury can be classified into three categories.

In the above equation, α represents irreparable lethal damage like double-stranded breaks, while β represents the damage done by two separate breaks or an accumulation of sublethal events. The variables can be manipulated in such a way to create a biologically equivalent dose, which can help compare clinical fractionation schemes by quantifying the biological effect of different schemes using a tissue-based variable (α/β ratio):

The α/β ratio represents the dose at which linear and quadratic components of cell killing are equal for a given tissue. A low α/β ratio (~3) indicates a late response, and a high ratio (~10) suggests an early response in tissue. In general, early responding tissue proliferates quickly while late responding tissues tend to be slower growing with a longer cell cycle. The fast proliferation in early responding tissue causes a majority of cells to spend time in the most radioresistant (S) phase. Increasing dose to overcome this can risk exceeding tissue tolerances, instead, treatments take advantage of a process called self-sensitizing. After irradiation, the surviving cells in highly proliferating tissues redistribute across other phases. By hyperfractionating, cells in radiosensitive phases are killed and then replaced by the surviving cells from more radioresistant phases. The second closely timed fraction, in turn, targets the newly redistributed cells. For late responding tissues (low α/β ratio), radioresistance arises from cells in early or resting radioresistant phases (G1, G0). Conventionally this is overcome using hypofractionated schemes might provide superior tumor control due to a more robust response in the linear portion.

In this case, the hyperfractionated scheme delivers a more effective dose. In a more complicated prescription, a boost could be added to provide an additional dose. The total BED would just be the summation of each individual BED. It is important to note that if the boost were using brachytherapy instead of EBRT, the BEDs would still be summed; however, the brachytherapy BED requires a different formulation due to the significant damage repair during delivery.

Pitfalls
The basic BED formalism isn’t a perfect comparison of a fractionation scheme’s effectiveness. For example, the general expression assumes negligible incomplete cell repair between fractions and does not account for proliferation during treatment. This means significant breaks in treatment or accelerated cancerous cell proliferation could reduce the accuracy by as much as 1 Gy/day. Furthermore, BED relies on accurate α/β values. Published literature shows a high level of variance, even on the same site, due to clinical differences in treatment, differing tumor histology, and the subjective nature of specific endpoints and stages. 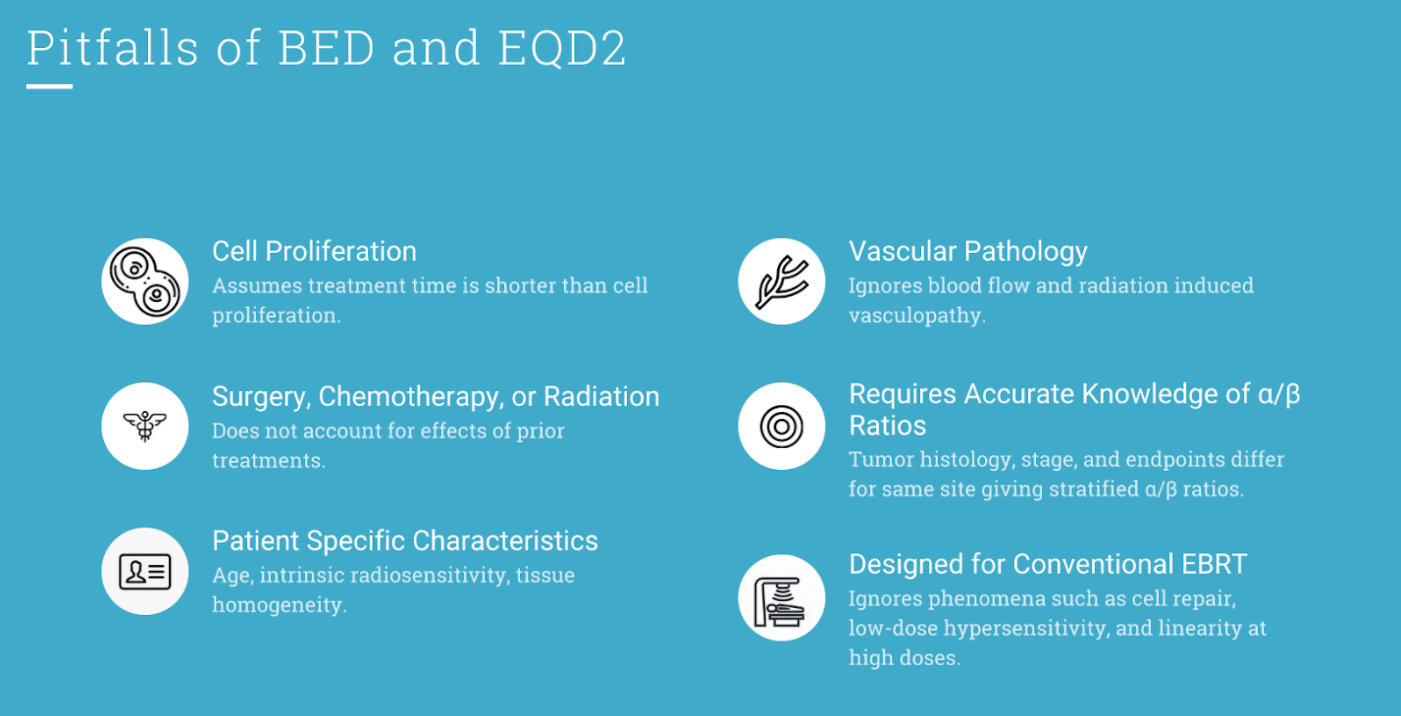 EQD2 Basics
With these limitations in mind, it is still a valuable tool in gauging a treatment’s effective dose delivered. In some cases, a BED might be desired, but in other cases, an alternative fractionation schedule is preferred. To aid in this, a similar formula called the Equivalent Dose in 2 Gy Fractions (EQD2) was developed to help convert the desired BED into a 2 Gy/fx scheme. This formulation provides a more practical way to view the effects of fractionation for most clinicians. The important difference between BED and EQD2 is that BED reports an effective dose, while EQD2 gives the equivalent dose needed in 2 Gy/fx to achieve that effective dose.

Using the previous example, suppose you want to figure out what 2 Gy fractionation scheme would give the same BED as the original prescription. If the BED = 96 Gy and the α/β = 10, then to achieve the same BED, a prescription of 200cGy x 80 would be needed. Since the EQD2 is just a derivation from BED and the LQ model, the pitfalls for both are still applicable. However, it does offer a powerful tool for clinicians to relate their empirical experience with a quantitative value. 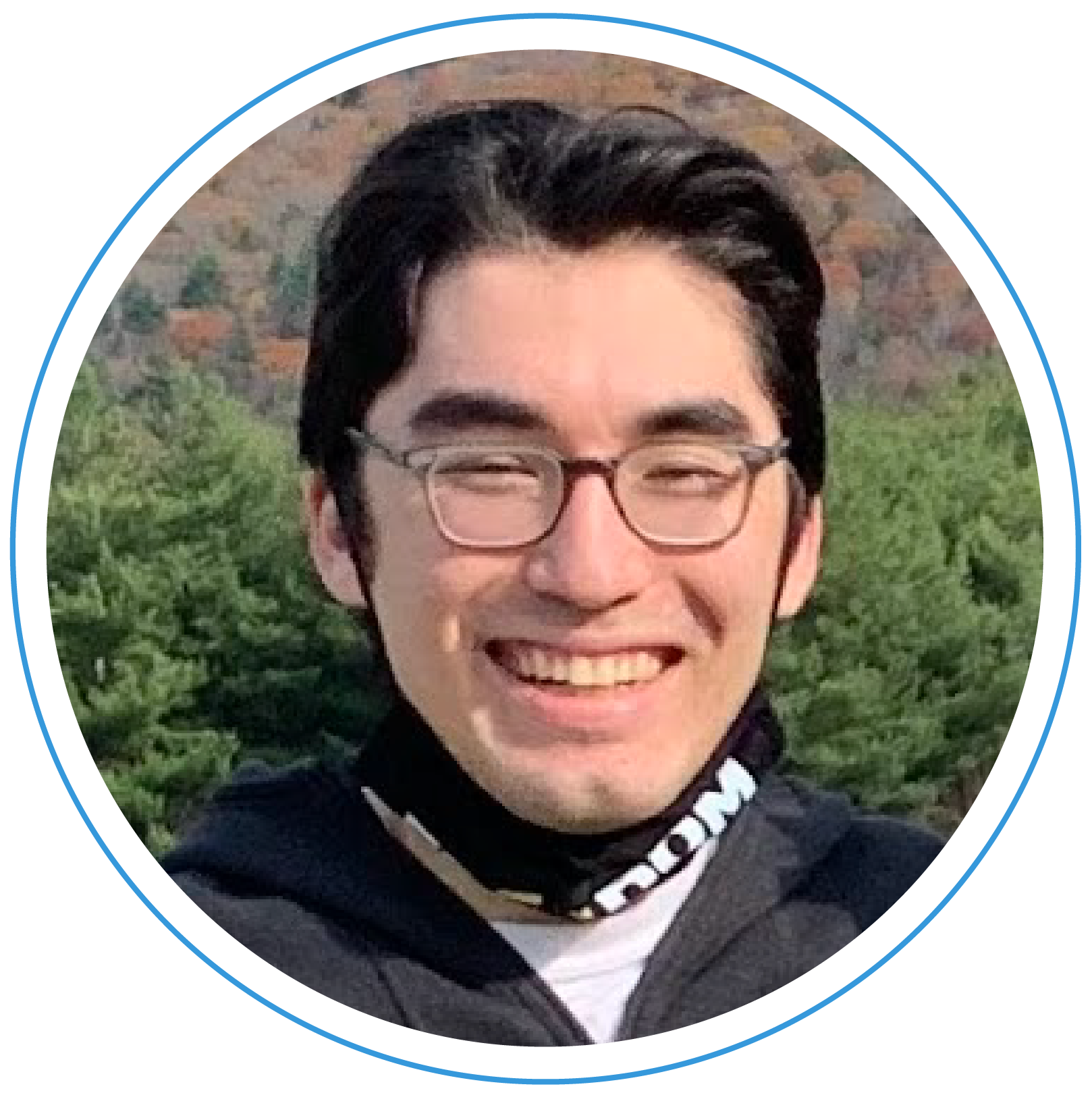 Kevin Crotteau is a second-year MS student attending Hofstra University, anticipating graduation in May 2021. His work mostly focuses on optimizing tasks through programming, since as Church-Turing proposed, “Any effective procedure can be simulated by a (generalized) computer.” His hobbies include cooking, rock climbing (when not trapped on the complanate surface that is Long Island), and video games.