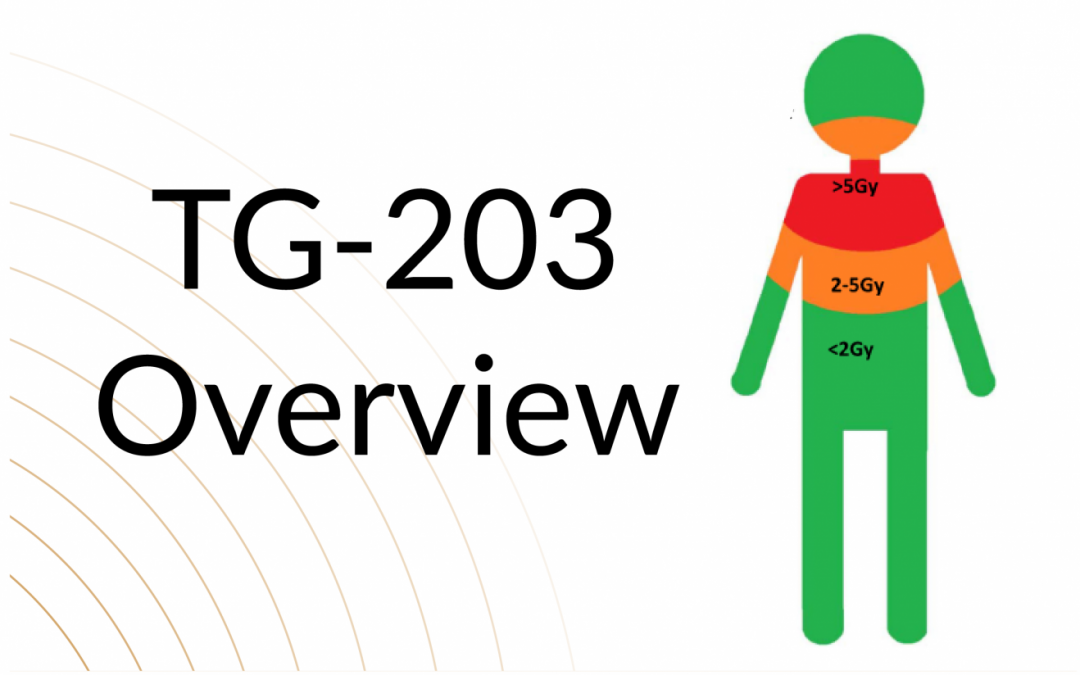 December 5, 2019
TG-203 Overview
Compliance and Clinical Solutions
The American Association of Physicists in Medicine (AAPM) recently published new guidance on the management of radiotherapy patients with pacemakers and cardiac defibrillators. Authored by Miften and Mihailidis, et. al., Task Group Report 203 addresses a topic that has been much more thoroughly investigated since the first publication on the topic by the AAPM in 1994 (TG-34).

Since then, there have been a number of studies undertaken to further the understanding of cardiac implantable electronic devices (CIEDs) and their vulnerability in a radiotherapy environment. Over the last few decades, the complexity of the devices has escalated dramatically, increasing the radiosensitivity of the implants. Guidance was needed to offset a lack of clarity and consistency from vendors regarding use of radiation therapy for patients with CIEDs, and a large gap between manufacturer recommendations and clinical policy was evident.

“The task group set out to create a set of guidelines for every particular user given their own locale, regardless of resources, to shape the environment that they want to have in their practice.” – Dimitris Mihailidis, co-author of TG-203

Damage to CIEDs can be induced in a number of different ways. Cumulative dose is frequently cited as having a deleterious effect, most notably beyond 2Gy, though a true threshold has been difficult to establish due to large variability in failure rates for individual devices. Neutrons are also known to induce memory upsets in CMOS circuits that can result in device failure, but are stochastic in nature, with no apparent threshold dose. The report includes additional failure modes such as susceptibility in MR fields, high dose rates, and electromagnetic interference. Failure modes can present clinically in a number of ways, ranging from a missed pulse to complete device failure.
Given the dose dependency of failure modes for CIEDs, the ability to predict and measure dose to the device is essential for the purpose of patient management. Most treatment planning systems can accurately calculate the dose to the device if it is located within 3cm from the field edge. For devices that lie more than 3cm beyond the field edge, it is recommended that the dose be measured as treatment planning systems often underestimate the dose delivered outside of the treatment field. A number of methods are prescribed for this measurement, each with unique performance characteristics: ion chamber, MOSFET, diode, TLD, OSLD, and film. For the case in which the device is more than 10cm from the field edge, dose assessment is not required. 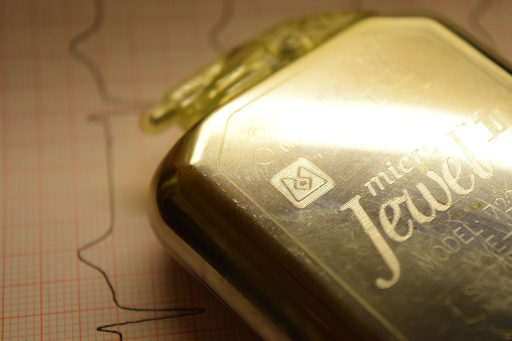 Care for patients with CIEDs requires careful attention and individualization. There are clinical scenarios in which the risk to the patient from radiotherapy is extremely low, and others where the risk is formidable. For this reason, the task group has recommended categorizing the patient status into one of three risk categories (Low, Medium, and High) based on three factors:

Each risk category has associated care guidelines to aid in mitigating the risk from the treatment. Higher risk categories incorporate low risk recommendations and suggest additional requirements for patient management. 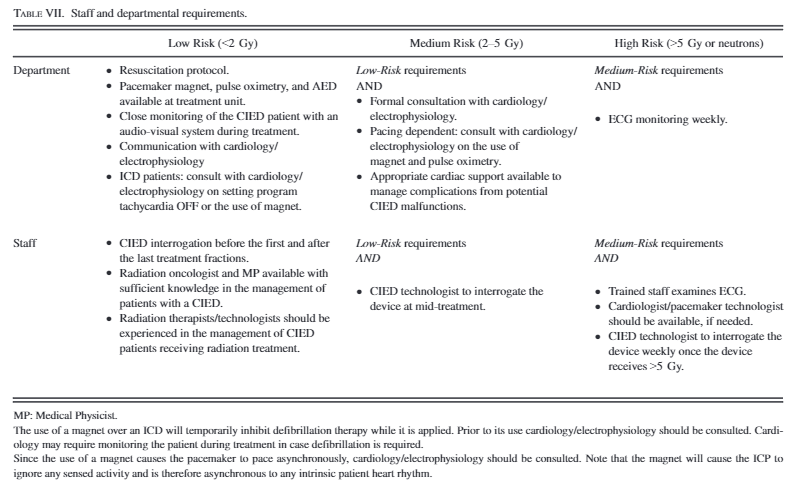 Before creating a treatment plan, regardless of risk level, it’s important to determine if the patient has received any prior irradiation. For planning, low energies (10MV) are recommended, while neutron-producing energies and modalities should be avoided if clinically possible. Additionally, beam design should be approached in a way that increases the distance and shielding between the CIED and the field edge. Because the detector CMOS circuits are of higher relative effective atomic number than tissue, the dose to the detector will be an underestimate given the lower energy of the scattered photons, but this difference can be ignored. Consistent with other publications, inactive leads do not need to be considered as part of the CIED, though active leads should be. During treatment, doughnut magnets can be potentially useful in changing device states during imaging/treatment.

The task group is written to provide meaningful structure and resources to improve the management of patients with CIEDs. To that end, the report includes clinical flowchart examples as well as a patient management checklist.

Implementation of the new guidelines requires a multidisciplinary approach with efforts from major players in the radiation therapy department as well as complementary providers such as cardiologists. According to Dimitris Mihailidis, co-author of the report, “If you don’t already have open lines of communication with cardiology, it is important to start building those channels. Having the radiation oncologist reach out to the cardiologist may be the most effective means of facilitating this communication, though nursing or physics staff could also play a role.” He goes on to recommend that departments “bring vendor contacts on board as an adjunct to patient care. Most major vendors like Medtronic or St. Jude’s have local contacts that can provide helpful resources and assistance with device-dependent patients. Medtronic has a nice online learning resource for using magnets, for example.”

TG-203 offers a “risk-based approach” for patient management, written in a way that allows clinicians to deliver the most beneficial treatment for patients while managing them in a manner consistent with risks encumbered by the treatment. The full task group report can be found here.

written by Tyler Blackwell
Tyler is a board certified medical physicist with extensive clinical experience in radiation therapy. He is active in several AAPM committees, has served as secretary-treasurer for the Northwest Chapter of AAPM, and is an ABR orals examiner. Tyler dabbles in real estate investing and loves preparing breakfast for his two kiddos.
← The Focal Spot: Alois Ndlovu 2019 Year in Review →