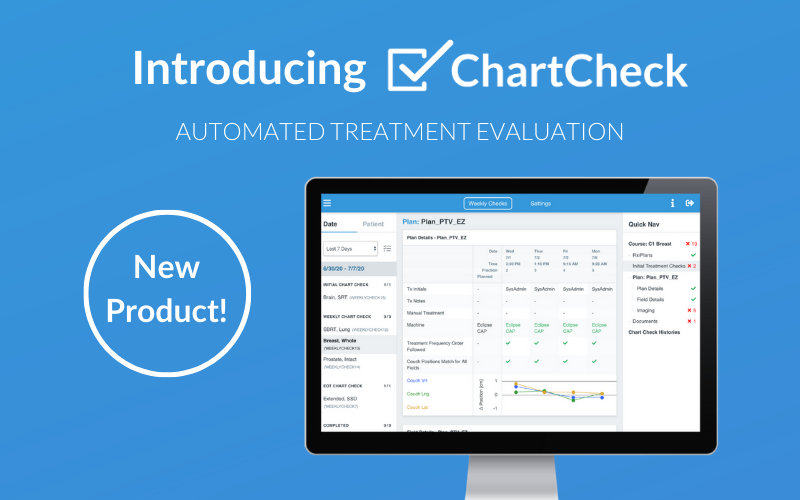 July 14, 2020
Introducing ChartCheck: Automated Treatment Evaluation
Company and Product
Think about how radiation oncology treatment has evolved over the last few decades. In the 1990s, treatment delivery was performed using 3D techniques with blocks. Today, complex dynamic arc IMRT or hypofractionated stereotactic treatments are common. In the 1990s, a treatment record was recorded on paper filed in a physical chart, while today the same data is organized in an electronic record and verify system. In the 1990s, on-treatment imaging consisted of portal images captured on film. Today, on-treatment imaging is an on-board CBCT or MRI. In the 1990s, TG-40 recommended physicists manually review treatment charts once a week, but in modern clinics, despite advances in other areas in radiation oncology, physicists still perform manual chart review once a week.

At Radformation, we thought about how chart checks might work if they had evolved at the same pace as the rest of radiation oncology. We concluded that most checking should be automated, allowing physicists to focus on high-level checks that require clinical experience rather than verifying that the planned and delivered gantry angles match. We didn’t want users to have to hunt down problems; we wanted to highlight problems so that physicists can work on solutions. Finally, we weren’t satisfied with checking charts once every 5 fractions. We wanted to know about errors immediately after each treatment fraction.

Radformation is excited to introduce ChartCheck, a modern approach to chart checking. ChartCheck is an active monitoring software that enables automatic treatment evaluation for routine physics checks. It begins verifying the patient’s chart minutes after treatment records are recorded back to your ARIA database and runs verification checks using data from prescriptions, plans, treatment fields, imaging, and documentation. Checks include 35+ recommended items from TG-275 and useful features like control charts. ChartCheck also looks at your treatment and imaging scheduling to ensure that you are ready for all upcoming fractions. The software presents the information in an organized, digestible format.

If any errors are detected, ChartCheck alerts you with an email detailing the issue(s). With this knowledge you can decide how to triage these errors well before the next fraction is delivered. 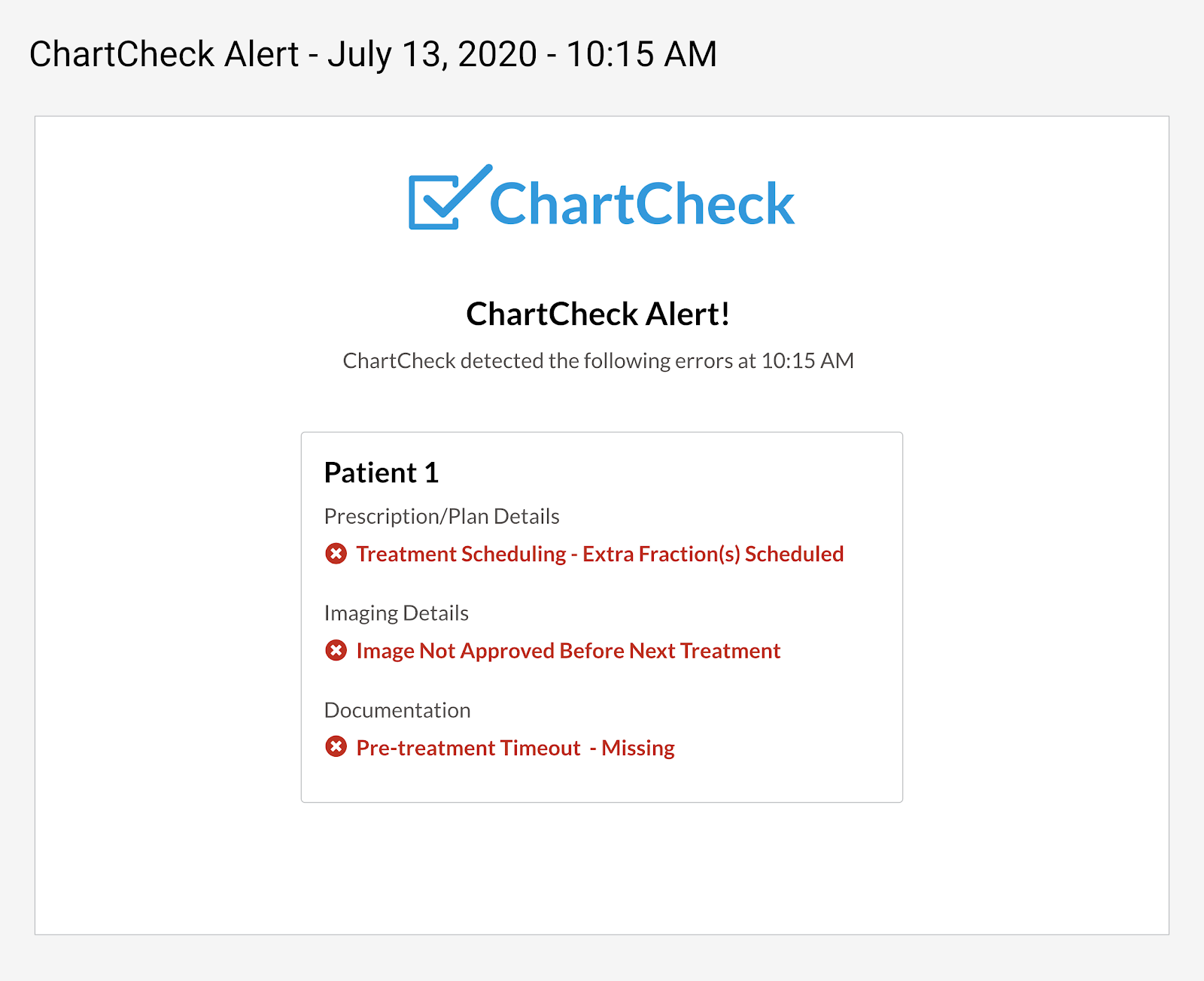 ChartCheck will also send you a summary email at the end of each detailing any issues from that day’s treatments that haven’t yet been reviewed. 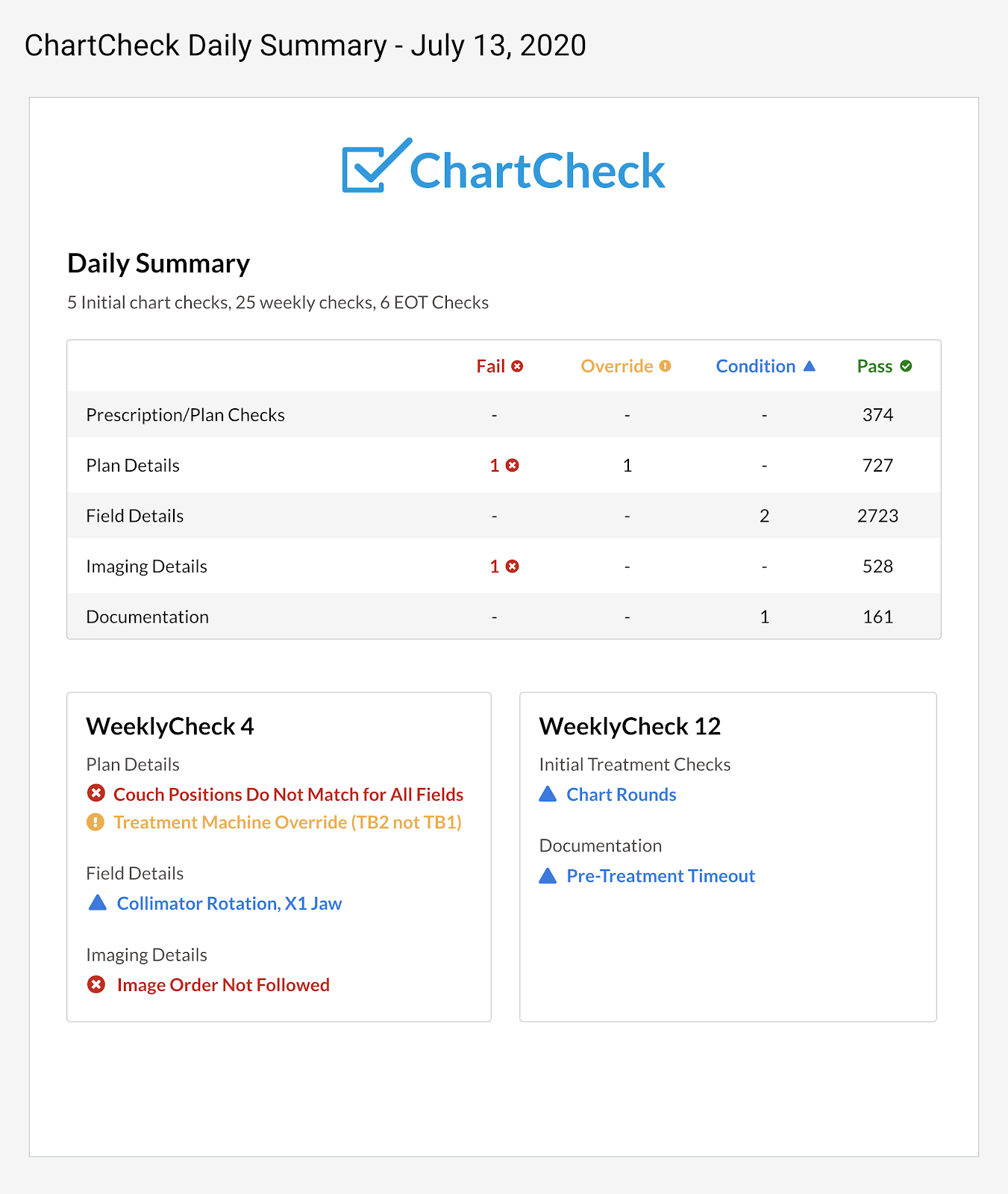 Today, chart checks look a lot like the 1990s, but they don’t have to anymore. ChartCheck provides an intelligent chart review workflow as advanced as the rest of your practice. By replacing manual, weekly chart reviews with automatic reviews of every treatment fraction, ChartCheck proactively informs you of any errors it detects.

ChartCheck will be ready for clinical release in the fall. Get in touch with us to learn more about how ChartCheck simplifies weekly physics review workflows. 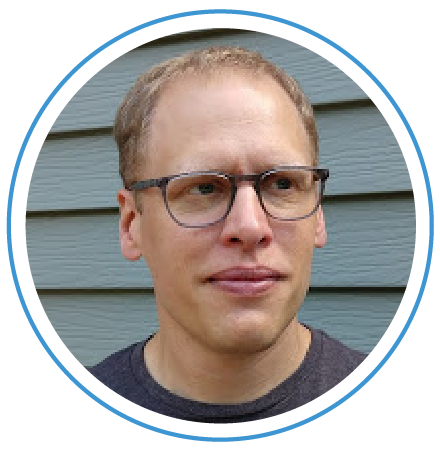 written by Andrew Jensen
Andrew is an ABR-certified Medical Physicist. For over a decade he was a clinical medical physicist who enjoyed working on safety and efficiency projects. He continues that work as the Product Manager of ChartCheck. Outside of work he enjoys raising three boys, playing tennis, and curling.